Nigeria’s electoral umpire, the Independent National Electoral Commission (INEC) has displayed the forms of the incumbent Governor and candidate of the Peoples Democratic Party (PDP), in the forthcoming election in the State, Godwin Obaseki, and those of 13 others.

The Commission displayed the particulars at its annex office, located at the former state secretariat of the PDP on Sapele Road in Benin, Edo State on Thursday.

INEC’s Information reveals that Governor Obaseki obtained the West African School Leaving Certificate in 1973 and Bachelor of Arts (B.A. Hons.), 1979, as his qualifications.

The Governor did not present his Higher School Certificate (HSC).

Obaseki will face his main challenger and candidate of the All Progressives Congress, APC, Pastor Osagie Ize-Iyamu and others in the September 2020 governorship election in the state.

APC’s Ize-Iyamu possesses an LLB from the University of Benin, Uniben.

Recall that Ize-Iyamu walked out of the PDP platform in 2016 while Obaseki enjoyed the support of the ruling APC during the same duration.

The reverse is the case this time.

The APC disqualified Obaseki from participating in the June 22 primary election alleging inconsistency in his certificate.

This was after the Governor raised the alarm, alleging that the former National Chairman of the party

He later joined PDP and emerged as the party’s sole candidate for the September 2020 governorship election. 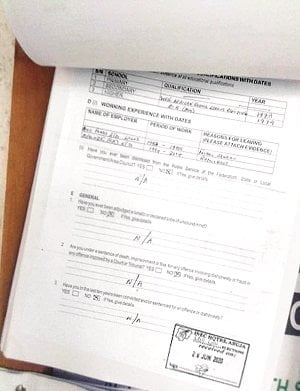