Stress and anxiety are social, medical and psychological problems that require urgent social attention. According to the World Health Organization (WHO), some 260 million people around the world suffer from some type of problem associated with anxiety. The pathological variant of this spectrum (generalized anxiety disorder or GAD) has a prevalence of 5%, or That is the same, 5 out of 100 people at any given time and place suffer from chronic anxiety for 6 months or more.

Anxiety is not only a physiological state that leads to certain unpleasant sensations, but it also translates into physical symptoms. For example, the cortisol released during continuous nerve moments acts as an immunosuppressant, resulting in a greater vulnerability of the patient to infections. Prolonged stress also promotes sudden movements in the intestinal muscles, so abdominal pain is a very common symptom in these conditions.

From sleep problems to physical weakness, nerves can manifest in the individual in many ways. Luckily, this state can be tackled:

instagram story viewer
discover with us 5 habits to learn to control your nerves in your day to day.

Control your nerves through new habits

Nervousness is defined as a temporary state of nervous excitement. When we are in an extreme situation (whether physical or emotional), the adrenaline hormone acts on the body, increasing the heart rate, contracting the blood vessels, dilating the airways and participating in the fighting reaction of the sympathetic nervous system (SNS).

For its part, cortisol promotes the metabolism of lipids, carbohydrates and proteins, depresses the immune system and increases blood glucose levels. In the short or medium term, these hormones prepare us to sharpen our senses, flee or fight in a moment of danger. As you see, the physiological basis of the nerves is completely normal at the evolutionary level: the body prepares us for a difficult time.

In any case, if this picture is sustained or too powerful it can become a problem. To avoid reaching the limit of the chronic, it is important to adopt habits that allow you to control your nerves more easily.

During physical exercise, endorphins are released that cause well-being. What's more, due to the concentration required to maintain breathing and physical rhythm, sport helps patients break negative thought cycles that are generating nerves and anxiety in the first instance.

It should be noted that nervousness can translate into unconscious hyperventilation (breathing faster than normal), something known as respiratory anxiety. Exercising helps to normalize the rate of breaths per minute, since it is necessary to control the respiratory rate perfectly during physical activity so as not to run out of air. As you exercise, you become aware of your own breathing and modulate it.

Caffeine is a central nervous system (CNS) stimulating alkaloid. This compound increases blood pressure, acts as a diuretic (helps urination), promotes the release of acid in the stomach and, above all, through nerve stimulation, it makes the patient feel more awake in a transitory.

Hyperventilation occurs when the act of breathing removes more carbon dioxide from the blood than metabolism produces, leading to a clinical condition known as hypocapnia. Although it is well tolerated by the body, the changes in blood pH associated with this state can result in a respiratory alkalosis, which occurs in the form of dizziness, blurred vision, weakness and even fainting.

At times of a panic attack (when hyperventilation is very rapid), the patient is usually given a bag to breathe into., as this will incorporate more CO2 into your body with each respiratory rate (by breathing air already inspired). In case the situation is not so serious but you still feel too fast, it is always a good idea to lie down, close your eyes and count the number of breaths per minute. The normal rate is 8 to 16 breath cycles every 60 seconds.

Something as simple as writing feelings on paper helps a lot to put your own emotions and feelings into perspective.

We live in our own head (redundant as it may sound) and, therefore, it is very difficult for us to look at the events that surround us from a subjective and impartial prism. There are many biases that act in each human mental process, highlighting above all of them that of negativity: before 2 events of the same intensity, the negative always weighs much more than the positive / neutral.

For this reason, writing down what you are feeling at a particular moment on a piece of paper and rereading it a while later can go a long way toward identifying the individual's problems and train of thought. In addition, it will surely help the patient to become aware that what was generating such nerves, in the end, was not something to worry so much about. Capturing thoughts in an invariable medium such as paper helps a lot to put things in perspective in the medium-long term..

5. Do not diagnose yourself and get used to seeking professional help

According to studies carried out in the health field, up to 22% of health professionals with chronic stress in extreme situations somatize their symptoms. This means that, "seeking to channel the emotions", the organism can suffer abnormal sensations on a physical level, such as pain in the belly, abdomen, head and others. Up to 30% of visits to primary care are due to symptoms that have no apparent cause.

Somatizing stress pictures is normal, so if all the medical tests have gone well for you and the pain you you feel is diffuse (it does not go to more), try not to continually self-diagnose, because it will only make the nerves get worse. Thinking about the presence of a disease increases anxiety, and anxiety encourages physical symptoms to appear without a clear organic cause. It is the fish that bites the tail.

It is possible to keep your nerves at bay with a number of techniques from home, but You may have to wonder why stress and nervousness are so intense in the first place..

The generalized anxiety disorder (GAD), depression and other psychological conditions present with diffuse day-to-day discomforts, which can be confused with “normal” or “expected” sensations. If you feel that something is wrong when it comes to controlling emotions, the best idea in all cases is to put yourself in the hands of a psychological professional. 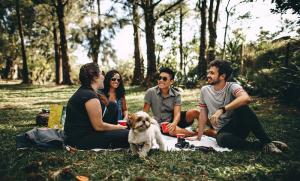 9 tips to manage stress through habits

Stress is a psychological and physiological response that human beings develop naturally in situa...

Although most of us are aware that being content and happy has a positive impact on our physical ...