The cerebrospinal fluid It is essential for the functioning and hygiene of the central nervous system, especially the brain. This substance is produced in the four structures that we know as “choroid plexuses”, located in the cerebral ventricles.

In this article we will describe the anatomy and major functions of the choroid plexuses. We will also mention the pathologies that are most frequently associated with these regions of the central nervous system.

The choroid plexuses are located in the ventricular system of the brain; there is a plexus in each of the four ventricles. Its nucleus is made up of connective tissue, capillaries, and lymphoid cells, and is surrounded by a layer of epithelial cells. The production of cerebrospinal fluid depends on the epithelium, main function of the choroid plexuses.

In addition, this structure separates and connects the central nervous system and the circulatory system, which explains the involvement of the choroid plexuses in the transport of nutrients and hormones to the brain and in the elimination of substances residuals.

The ventricles are four interconnected brain chambers. After being generated in the choroid plexuses, which are found in practically all regions of the ventricular system, cerebrospinal fluid circulates through the brain through the ventricles until reaching the spinal cord.

Functions of this structure

The number of functions attributed to the choroid plexuses has increased in recent years; They have been found not only relevant for their ability to make cerebrospinal fluid and protect neurons, but they also fulfill additional roles that could lead to therapeutic benefits when research advances in the future.

Cerebrospinal fluid serves several key functions in the central nervous system: dampens the blows received by the brain and allows it to maintain its density, participates in immune defenses, regulates homeostasis (extracellular balance) and helps eliminate waste substances from the brain.

2. Formation of the blood-brain barrier

The epithelial tissue of the choroid plexuses makes up a part of the blood-brain barrier, which separates blood and extracellular fluid from the central nervous system but it allows the exchange of nutrients and residues. It also has a defensive function, by preventing the entry of certain toxins.

The extracellular balance of the brain and spinal cord is maintained in part thanks to the choroid plexuses, which modulate the interaction between the central nervous system and the immune.

4. Regeneration of tissues and neurons

The choroid plexuses secrete neuroprotective compounds that promote the healing of neuronal damage; this effect has been associated mainly with traumatic injuries. Also in these structures some degree of neurogenesis has been detected (production of new neurons from progenitor cells) even in adulthood.

The choroid plexuses contribute to the detoxification of the brain in two ways: on the one hand, the cerebrospinal fluid they produce fulfills this function, and on the other, its connection with the circulatory system facilitates the transfer of residual substances to the blood to allow its elimination.

In addition to the processes we have described, in recent years the role of choroid plexuses in other functions: the production of polypeptides that nourish neurons, the transfer of information to the nervous system nice...

Since the choroid plexuses, and in particular the cerebrospinal fluid they produce, fulfill fundamental functions for the organism, alterations in the anatomy and in the functionality of these structures can favor the appearance of various pathologies.

There are also a large number of factors that occasionally cause alterations in the choroid plexuses. The relationship of these structures with Alzheimer's disease, cerebrovascular accidents and head injuries is especially relevant.

In people with the Alzheimer disease atrophy occurs in the ependymal cells of the choroid plexuses; This causes the production of cerebrospinal fluid to decrease, oxidative stress increases, and toxins accumulate in the brain to a greater extent.

On the other hand, and although it frequently does not have serious consequences, appearance of cysts in the choroid plexuses during fetal development it can cause tumors and has been associated with aneuploidies (changes in the number of chromosomes in cells) such as Edwards syndrome, which is fatal for most babies.

What is epigenetics? Keys to understanding it

How important is DNA. The genetic code is the linchpin of life, which in the case of humans store... 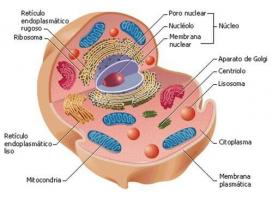 The human body is made up of 37 trillion cells, which are the unit of life.It is not surprising t...

Histamine is one of the most important elements in the world of medicine, and its use is common w...