Our brain controls and enables our movements. Although this may seem like a very reductionist description, it does not stop being real. Our nervous system, within which the brain is located, is in charge of sending signals to all the muscles of our body so that they move.

To be more exact, these signals are sent by motor neurons or motor neurons. Thanks to which we can go from walking, to breathing, sneezing or getting our hearts to beat.

What are motor neurons?

Motor neurons, also known as motor neurons, are a set of neurons in the nervous system whose main mission is to send a series of nerve impulses to the muscles or glands. These neurons are found in the brain of all vertebrate species. In the human species, they are especially located in the spinal cord and in Brodman's area 4.

This transmission of nerve impulses is intended to exert control over the skeletal muscles and the smooth muscles that make up the organs and glands. That is, thanks to motor neurons we are able to carry out any type of movement, just as our organs are able to function properly.

However, in order to carry out these functions, motor neurons need the information sent to them by sensory or efferent neurons. Since in order to perform muscle movements appropriate to the situation, our brain must receive information from the outside. Hence the need for both types of neurons to work in harmony.

In this way, our nervous system integrates the information from both types of neurons and allow us to move and react according to the demands and circumstances of our context Exterior.

Although motor neurons have traditionally been considered passive channels for transmitting information, some results obtained in recent studies point to the idea that these nerve cells have much more complex operating dynamics, being able to produce behaviors or motor patterns by themselves.

The goal of each neuron is to activate a specific muscle fiber in order to carry out a certain movement, each of these junctions are called motor units. These functional units can be divided into several types:

These types of fibers tolerate tiredness and fatigue very well, which is why they are especially suitable for maintaining a muscle contraction or posture without fatigue. For example, help us to stand upright without getting tired.

In this second case, the fibers involved are the white fibers, which are responsible for innervating larger muscle groups. Compared to slow motor units, fast fatigue motor units have times very short reaction times but they deplete their energies more quickly and, therefore, tire a lot before.

These motor units are extremely effective in performing movements that require rapid bursts of energy, such as jumping or running.

Finally, this last type of motor unit is halfway between the two previous groups. Although they exert their function on medium-sized muscles, your reaction time is slower than in FF units and have the ability to tolerate fatigue longer.

As mentioned above, each neuron has a fundamental role in the activation of a specific fiber or tissue; Therefore, a classification of different types of neurons can be made according to the tissue on which they exert their influence.

This type of motor neurons act on the skeletal muscles, therefore they have a transcendental role in locomotive skills.

These skeletal muscles are made up of striated fibers, which make up most of the body mass and are distinguished from the rest by being muscles that we can move at will.

Furthermore, within this group of somatic motor neurons we can find two more subgroups. The first of these subgroups is used to classify neurons according to their position, while the second divides them according to the fibers to which they connect.

Classification according to position

Classification according to fibers

Visceral motor neurons are responsible for innervating all those muscle fibers that we cannot move voluntarily; that is, the smooth muscles. This musculature controls, for example, the movements of our heart, viscera and intestines, etc.

In order to carry out their function, visceral motor neurons also synapse with neurons in the ganglia of the autonomic nervous system, sending the signals to the relevant organ and innervating the visceral musculature.

The sole mission of this last group of neurons is to activate the muscles present in the face and neck, known as the branchial muscles.

There are a series of diseases or pathologies of neurological origin that are distinguished by presenting a gradual degeneration of motor neurons, presenting different symptoms depending on whether the affected neurons are superior or inferior.

Those diseases in which a degeneration of the upper motor neurons is experienced are characterized by a general muscle weakness. When the affected motor neurons are the lower ones, the person can suffer muscular tension, rigidity and an overactivity of the reflexes that causes involuntary muscular contractions.

Some of the diseases related to the degeneration of motor neurons are: On the matter of brain hemispheres It is common to hear some phrases like these: "If you are a pe...

The basal ganglia they are part of the most primitive structures of the human brain.These groups ... 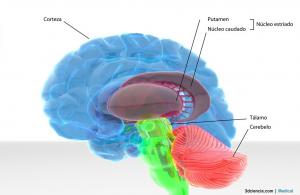 The thalamus is one of the parts of the brain more important. Not only is it one of the largest b...