Lamarck's Theory and the Evolution of Species

For centuries, the question of how the different forms of life could have emerged has been a question that has fascinated humanity. Myths and legends have been created around this question, but more complete and systematic theories have also been developed.

The Lamarck theory it is one of the most famous attempts to propose an idea of ​​the evolution of species in which there is no divine intelligence to direct the process.

The person who proposed what we now know as Lamarck's theory was Jean-Baptiste de Lamarck, was a French naturalist born in 1744. In his time, the study of living beings was a totally different discipline from what biology is today, and that is why it was sustained ideas regarding the functioning of natural processes in which the divine intervened, something that would be scandalous by scientific standards current.

Lamarck made biology largely independent of religion proposing a theory of evolution in which the intelligences of the afterlife had no role.

Before the English naturalist Charles Darwin proposed the theory of evolution that would forever change the world of biology, Lamarck's theory already proposed a explanation about how the different forms of life had been able to appear without having to resort to one or more gods.

His idea was that although the origin of all life forms could be created spontaneously (presumably by the direct work of God) but that, after this, the Evolution was taking place as a product of a mechanical process resulting from the physical and chemical properties of the matter with which organisms are formed and their environment.

The basic idea of ​​Lamarck's theory was as follows: the environment changes, life forms continually struggle to adapt to the new demands of their habitatThese efforts modify their bodies physically, and these physical changes are inherited by the offspring. In other words, the evolution proposed by Lamarck's theory was a process that is sustained by a concept called inheritance of acquired characteristics: parents transmit to their children the traits they acquire from how they relate to the environment. 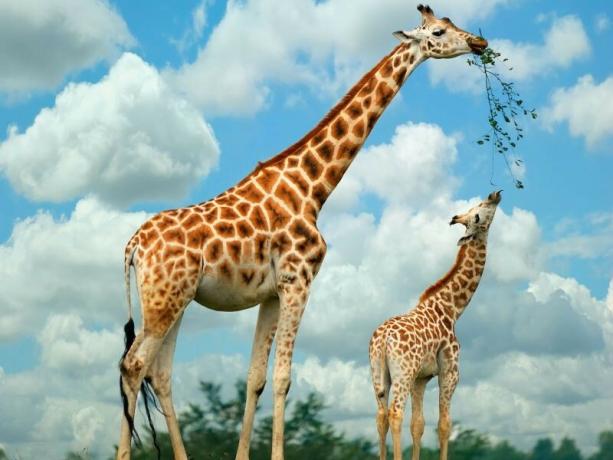 Let's see how this hypothetical process worked using the most famous example of Lamarck's theory: the case of giraffes stretching their necks.

The example of giraffes and Lamarck

At first, an antelope-like animal sees its environment become increasingly dry, so that the grass and the bushes are becoming more and more scarce and need to resort to feeding on the leaves of the trees with greater frequency. This makes stretching the neck one of the defining habits of the day-to-day life of some of the members of their species.

Thus, according to Lamarck's theory, pseudo-antelopes that don't struggle to access tree leaves by craning their necks tend to die leaving little or no offspring, while those who stretch their necks not only survive as having the stretched neck is prolonged, but this physical characteristic (the longer neck) is transmitted to your inheritance.

In this way, With the passage of time and generations, a way of life appears that did not exist before: the giraffe.

From simplicity to complexity

If we move from the foreground of describing the process by which one generation passes its acquired characteristics to the next, we will see that the explanation by which Lamarck's theory tries to account for the diversity of species closely resembles the ideas of Charles Darwin.

Lamarck believed that the origin of species was embodied in a very simple way of life that generation after generation gave way to more complex organisms. These late species carry the traces of the adaptive efforts of their ancestors, with which the ways in which they could adapt to new situations are more diverse and gives way to more variety of life forms.

Where does Lamarck's theory fail?

If Lamarck's theory is considered an outdated model, it is, in the first place, because today it is known that individuals have a limited range of possibilities when it comes to modifying their body with their use. For example, necks are not lengthened simply by stretching them, and the same happens with legs, arms, etc.

In other words, the fact of using a lot of certain strategies and parts of the body does not make them adapt their morphology to improve the fulfillment of this function, with some exceptions.

The second reason Lamarckism fails is because of its assumptions about the inheritance of acquired abilities. Those physical modifications that do depend on the use of certain organs, such as the degree of bodybuilding of the arms, are not passed on to offspring, automatically, since what we do does not modify the DNA of the germ cells whose genes are transmitted during reproduction.

Although it has been proven that some life forms transmit their genetic codes to others through a process known as horizontal gene transfer, this form of modification of the genetic code is not the same as that described in Lamarck's theory (among other things because at his time the existence of genes).

What's more, recently it has been discovered a type of genes whose function is reboot the epigenome of life forms that are being created in their zygote phase, that is, make sure that there are no acquired changes that can be inherited by the offspring.

Charles Darwin also tried to explain the mechanisms of biological evolution, but unlike Lamarck's did not limit himself to placing the inheritance of acquired traits at the center of this process.

Instead, he theorized about the way in which the pressures and demands of the environment and the forms of life that coexist with each other cause that, in the long run, certain traits are passed on to the offspring more frequently than others, which over time would cause a good part of the individuals of the species, or even almost all of them, to end up having that characteristic.

Thus, the progressive accumulation of these changes would cause different species to be created over time.

The merits of Lamarckism

The fact that this naturalist rejected the idea that miracles play an important role in the creation of all species caused Lamarck's theory of evolution to be ignored or belittled until the time of its death. Nonetheless Today Lamarck is widely recognized and admired not because his theory was correct and served to explain the process of evolution, since Lamarck's theory has become obsolete, but for two different reasons.

The first is that the way in which Lamarck conceived of evolution can be interpreted as an intermediate step between classical creationism according to which all species have been created directly by God and remain the same through generations, and Darwin's theory, the basis of the theory of evolution that is the current foundation of the science of biology.

The second is simply the recognition of the difficulties that this naturalist had to face when devising and defending the theory. Lamarckist evolution in its historical context at a time when the fossil record of life forms was sparse and classified as chaotic way. Studying something as complex as biological evolution is not easy, because for this it is necessary to analyze in detail very specific aspects of forms of life and build with it a highly abstract theory that explains the kind of natural law behind all this kind of changes.

Circadian rhythms: what are they and in what biological functions do they intervene

Human beings are animals of habit. Our lives are structured in patterns that repeat themselves fr...

Since life appeared on Earth, a great diversity of structures and beings have appeared, evolved a...

The 6 vitamins to take care of brain health

It is common to hear that eating whole foods, fruits and vegetables, can help us lose weight and ...