When we think of the nervous system, we tend to think almost exclusively of brain.

Focusing on this organ is logical due to its special relevance, but it is often forgotten that the The nervous system is precisely a system, that is, a set of interrelated elements between Yes. In other words, not everything is the brain. Furthermore, within the nervous system there are two major divisions, the central nervous system and the autonomic nervous system.

In addition to the king organ, in the central nervous system we can also find another great component: the spinal cord, through which most of the innervations of the body pass.

What is the spinal cord?

The spinal cord is the most caudal part of the central nervous system, beginning in the medulla oblongata and ending in the lumbar area.

It is the lower part of the neuroaxis, with a slightly flattened and asymmetric cylindrical shape that, like the brain, is strongly protected as it is surrounded by the spinal column. Likewise, it also enjoys the protection of the meninges and the

instagram story viewer
cerebrospinal fluid, which prevent most of the damage caused by the elements of the environment.

In a sense, it is a part of the nervous system that is not completely anatomically separated from the brain, but many of the elements involved in the latter work at the same time in the medulla spinal. However, it is possible to identify the beginning of this structure just below the brainstem.

This part of the nervous system is the connection point between the brain and the rest of the body., passing the vast majority of nerve fibers through the medulla. The transmission of information does not generally occur through a single neuron, but as a general rule, the neurons that make up the different nerves of the body make one or more intermediate synapses, either within the medulla itself or outside it (as with the neurons of the nerve ganglia).

The spinal cord receives both inputs and outputsIn other words, it has both neurons that receive information from the receptors of the different organs and structures and others that send information and orders to these areas.

On the other hand, it must be taken into account that the spinal cord is not simply a kind of conduit through which nerves from all parts of the body travel towards the brain and vice versa; its composition and functions are more complex than they appear, and it is even possible to find similar elements between this part of the nervous system and the brain. For example, in both structures we find an envelope of meninges, cerebrospinal fluid and a differentiation between white matter and gray matter.

Although the division into vertebrae has more to do with the configuration of the spine, that is, the bone protection of the marrow which in turn serves as supportive of the body position, it may be useful to take it into account to locate the situation of the parts of the spinal that innervate the different areas bodily.

Most human beings are born with a total of 33 vertebrae, counting among them seven cervical, twelve thoracic, five lumbar, five sacral and four coccygeal vertebrae. As we develop, the number is reduced as the lower ones merge to form the sacrum and coccygeal bones, only the first 24 being considered vertebrae, ending in L5 or lumbar 5. The beginning of the spinal cord is situated a little before its covering by the vertebral column, being attached to the medulla oblongata. The point where the cord ends can vary from person to person, generally culminating between the L1 and L3 vertebrae.

Between the C4 and T1 vertebrae there is an area somewhat wider than the rest of the spinal cord. This area, known as cervical intumescence, is thicker because in this place are the nerve connections that connect with the upper extremities.

Towards the lower end of the medulla, a thickening can be observed, between the vertebrae T11 to L1, called lumbosacral intumescence. It is the part of the medulla that innervates the lower extremities, and which together with the so-called horsetail connects with the parts of the body located at the lower end.

Regarding the aforementioned ponytail, which receives its name due to the similarity of its shaped with the tail of said animal, it is the set of nerve fibers that connect with the nerves spinal. This shape is due to the fact that the spinal cord is shorter than the vertebral column, with which the areas for below the lower back should project their nerve endings to the spinal nerves located below her. 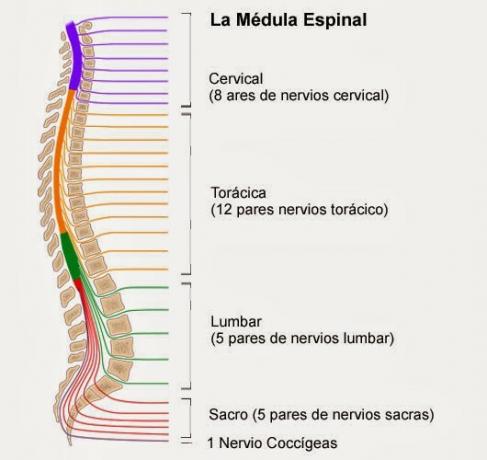 Parts of the medulla

It has been observed that the medulla has different nerve connections that innervate different areas of the body. However, it may be of interest to analyze the internal structure of the spinal cord.

Like in the brain, in the medulla we find both gray and white matter. However, the arrangement is reversed, the white matter being located in an external position and the gray in the internal part of the medulla. Generally, the transmission of information occurs ipsilaterally, that is, the right side of the body is treated by the left part of the spinal cord while the left side is worked with the part right.

The gray matter has this coloration because it is a set of cells or nuclei of neurons, which project their axons to other areas. That is, it is in these areas where the bodies of neurons accumulate, information processing centers (although this processing is very cursory as it is not in the brain).

The gray matter is structured in different horns or antlers, the main ones being the ventral horn, the dorsal horn and the intermediate zone. There is also the lateral horn, but only in the thoracic area and the beginning of the lumbar.

The dorsal horn is in charge of receiving information from the systems innervated by the medul **** a. In other words, it is the part of the spinal cord that ensures that the external or internal stimulation detected by the receptors can be sent to the brain.

The ventral horn of the medulla, unlike the dorsal horn, has the main function of emitting information to the nerves, causing the body to react to external stimuli or interiors. Through it the voluntary movement is exercised.

With regard to the intermediate zone, there are many interneurons, which are those whose main function is to serve as a link between two other neurons. They are connecting bridges between distal areas.

Although it only appears in the thoracic area and part of the lumbar area, the lateral horn is of great importance, innervating different structures and participating in the sympathetic and parasympathetic systems of the nervous system autonomous. In this sense, it plays a fundamental role in homeostasis, the process by which the body establishes a balance or harmony between different areas of the body so that the set of organs works in a healthy way and coordinated.

The white matter is formed mainly by the axons of neurons, interconnecting the spinal cord and the brain.. It is organized into different fibers that are named after the areas with which they connect, and can be ascending or descending. Furthermore, this grouping of projections of neurons is visible to the naked eye, mainly due to the contrast between their paler color compared to the parts of the nervous system that are around it (hence the name "substance White").

In the medulla you can find three columns, the dorsal, the lateral and the ventral, and they can be seen without the need for a microscope. The dorsal column is mainly made up of somatic-type afferent fibers. In other words, as with the dorsal horn in the gray matter, they are responsible for transmit sensory information, from the brain to the spinal cord and vice versa depending on whether it is ascending or falling.

The ventral and lateral columns are tracts and fascicles, which tend to be efferent., transporting the motor orders given by the brain, so they go "from top to bottom".

Functions of the spinal cord

The importance of this part of the central nervous system is beyond doubt. It is only necessary to observe the effects that damage has in this area to understand that it is a fundamental section for normal operation. And it is that the spinal cord is more than the channel through which the brain communicates with the rest of the body; You can also perform certain automated activities, such as reflex arcs (in which you spend very little time between the acquisition of a stimulus and the emission of a motor reaction, since this process does not pass through the brain, as we will see).

In summary, The main functions that make this section of the nervous system so relevant are the following.

1. Transmission of sensory and motor information

The spinal cord is the relay nucleus for neurons and nerve fibers present in most parts of the body. This means that when the brain gives the order to perform an action (for example, give an kick a ball) as when a part of our body perceives some stimulus (a caress on the arm), the information passes first to the spinal cord, which will send the information to the muscles or brain for me to process.

Although it is in the brain where the stimulation becomes conscious, the medulla makes a quick judgment of the situation in order to to determine whether to just send the information to the brain or to trigger an emergency action even before the I arrived.

Thus, with regard to mental processes, it allows the appearance of a type of shortcuts in which the Information does not have to wait to be processed by higher instances to generate a response.

As we have just seen, sometimes the spinal cord itself produces a performance without the information having yet been transmitted to the brain. These performances are what we know as reflexes. To illustrate, we can think of accidentally putting a hand on fire: the hand is withdrawn immediately, unplanned and without the information having yet passed to the brain.

The role of reflections is clear: to offer quick reaction to potentially dangerous situations. As the sensory information already produces a response when it reaches the spinal cord, without having to wait to be captured by the brain, you save time, something very valuable in the event of an animal attack or when you can receive injuries from falls or Burns. In this way, programmed actions are carried out in the design of the spinal cord, and they are always executed in the same way.

These types of functions fit in with the logic that governs the nervous system in general (and, consequently, also the spinal cord): speed is often more important than precision or considerations of whether or not taking a certain action is within the norm social. The time we save with this can save us a lot of problems when our physical integrity is at stake.

However, in the case of babies there are also reflexes that are lost during the first months after birth and whose The basic function is not always to react quickly, but to perform acts that favor survival, such as sucking milk maternal. In this case we are talking about primitive reflexes, whose absence may be a sign of illness.

Neuropsychoanalysis: what it is and how it studies the human mind

Although the general idea of ​​psychoanalysis is that they have nothing to do with neurosciences,...

The human brain It is configured by many structures, being one of the most visible and the one th...

We live in a society where alcohol consumption among young people has become popular and in which...