The glutamate mediates most excitatory synapses in the Central Nervous System (CNS). It is the main mediator of sensory, motor, cognitive and emotional information and is involved in the formation of memories and their recovery, being present in 80-90% of brain synapses.

As if all this is of little merit, it also intervenes in neuroplasticity, learning processes and is the precursor to GABA –The main inhibitory neurotransmitter of the CNS. What more can you ask of a molecule?

Possibly has been one of the most extensively studied neurotransmitters in the nervous system. In recent years its study has been increasing due to its relationship with various neurodegenerative pathologies (such as Alzheimer disease), which has made it a powerful drug target in various diseases.

It is also worth mentioning that given the complexity of its receptors, this is one of the most complicated neurotransmitters to study.

The glutamate synthesis process begins in the Krebs cycle, or the tricarboxylic acid cycle. The Krebs cycle is a metabolic pathway or, for us to understand,

instagram story viewer
a succession of chemical reactions in order to produce cellular respiration in the mitochondria. A metabolic cycle can be understood as the mechanism of a clock, in which each gear fulfills a function and the simple failure of a part can cause the watch to be damaged or not hour. The cycles in biochemistry are the same. A molecule, through continuous enzymatic reactions –the gears of the clock–, changes its shape and composition in order to give rise to a cellular function. The main glutamate precursor will be alpha-ketoglutarate, which will receive an amino group by transamination to become glutamate.

It is also worth mentioning another quite significant precursor: glutamine. When the cell releases glutamate into the extracellular space, astrocytes - a type of cell glial - recover this glutamate which, through an enzyme called glutamine synthetase, will become glutamine. Later, glutamine is released by astrocytes, which is recovered by neurons to be transformed back into glutamate. And possibly more than one will ask the following: And if they have to return glutamine to glutamate in the neuron, why does the astrocyte convert poor glutamate into glutamine? Well, I don't know either. Perhaps it is that the astrocytes and neurons do not agree or perhaps it is that the Neuroscience It's that complicated In any of the cases, I wanted to make a review of astrocytes because their collaboration represents 40% of the turnover glutamate, which means that most of the glutamate is recovered by these glial cells.

There are other precursors and other pathways by which glutamate that is released into the extracellular space is recovered. For example, there are neurons that contain a specific glutamate transporter –EAAT1 / 2– that directly recover glutamate to the neuron and allow the excitatory signal to be terminated. For further study of the synthesis and metabolism of glutamate, I recommend reading the bibliography.

As they usually teach us, each neurotransmitter has its receptors on the postsynaptic cell. The receptors, located on the cell membrane, are proteins to which a neurotransmitter, hormone, binds neuropeptide, etc., to give rise to a series of changes in the cellular metabolism of the cell in which it is located in the receptor. In neurons we generally place the receptors on postsynaptic cells, although it doesn't really have to be that way.

They also usually teach us in the first year of the race that there are two main types of receptors: ionotropic and metabotropic. Ionotropics are those in which when their ligand - the "key" of the receptor - binds, they open channels that allow the passage of ions into the cell. Metabotropics, on the other hand, when the ligand binds, cause changes in the cell through second messengers. In this review I will talk about the main types of ionotropic glutamate receptors, although I recommend studying the literature to understand metabotropic receptors. Here are the main ionotropic receptors:

NMDA and AMPA receptors and their close relationship

Both types of receptors are believed to be macromolecules made up of four transmembrane domains - that is, they are made up of four subunits that they cross the lipid bilayer of the cell membrane - and both are glutamate receptors that will open cation channels - positively charged ions. But even so, they are significantly different.

One of their differences is the threshold at which they are activated. First, AMPA receptors are much faster to activate; while NMDA receptors cannot be activated until the neuron has a membrane potential of about -50mV - a neuron when it is inactivated is usually around -70mV-. Second, the cations step will be different in each case. AMPA receptors will achieve much higher membrane potentials than NMDA receptors, which will collaborate much more modestly. In return, NMDA receptors will achieve much more sustained activations over time than AMPA receptors. Therefore, those of AMPA activate quickly and produce stronger excitatory potentials, but deactivate quickly. And those of NMDA take time to activate, but they manage to maintain the excitatory potentials they generate much longer.

To understand it better, let's imagine that we are soldiers and that our weapons represent the different receptors. Let's imagine that the extracellular space is a trench. We have two types of weapons: revolver and grenades. Grenades are simple and quick to use: you remove the ring, throw it away and wait for it to explode. They have a lot of destructive potential, but once we've thrown them all away, it's over. The revolver is a weapon that takes time to load because you have to remove the drum and put the bullets one by one. But once we have loaded it we have six shots with which we can survive for a while, although with much less potential than a grenade. Our brain revolvers are NMDA receptors and our grenades are AMPA receptors.

Glutamate excesses and their dangers

They say that in excess nothing is good and in the case of glutamate it is fulfilled. Then we will cite some pathologies and neurological problems in which an excess of glutamate is related.

1. Glutamate analogs can cause exotoxicity

Drugs analogous to glutamate - that is, they fulfill the same function as glutamate - such as NMDA - to which the NMDA receptor owes its name - can cause neurodegenerative effects at high doses in the most vulnerable brain regions such as the arcuate nucleus of the hypothalamus. The mechanisms involved in this neurodegeneration are diverse and involve different types of glutamate receptors.

2. Some neurotoxins that we can ingest in our diet exert neuronal death through excess glutamate

Different poisons of some animals and plants exert their effects through the glutamate nerve pathways. An example is the poison from the seeds of Cycas Circinalis, a poisonous plant that we can find on the Pacific island of Guam. This poison caused a high prevalence of Amyotrophic Lateral Sclerosis on this island where its inhabitants ingested it daily, believing it to be benign.

Glutamate is the main neurotransmitter in acute brain disorders such as heart attack, cardiac arrest, pre / perinatal hypoxia. In these events in which there is a lack of oxygen in the brain tissue, the neurons remain in a state of permanent depolarization; due to different biochemical processes. This leads to the permanent release of glutamate from the cells, with subsequent sustained activation of glutamate receptors. The NMDA receptor is especially permeable to calcium compared to other ionotropic receptors, and excess calcium leads to neuronal death. Therefore, the hyperactivity of glutamatergic receptors leads to neuronal death due to the increase in intraneuronal calcium.

The relationship between glutamate and epilepsy is well documented. Epileptic activity is considered to be especially related to AMPA receptors, although as epilepsy progresses, NMDA receptors become important. 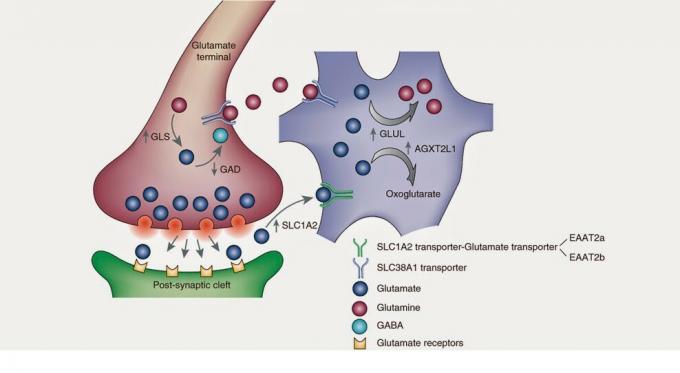 Usually, when you read this type of text, you end up humanizing the molecules by putting labels on them as "good" or "bad" - that has a name and is called anthropomorphism, very fashionable back in medieval times. The reality is quite far from these simplistic judgments.

In a society in which we have generated a concept of "health" it is easy for some of the mechanisms of nature to bother us. The problem is that nature does not understand "health". We have created this through medicine, pharmaceutical industries and psychology. It is a social concept, and like all social concepts it is subject to the advancement of societies, be it human or scientific. Advances show that glutamate is associated with a number of pathologies like Alzheimer's or Schizophrenia. This is not an evil eye of evolution to the human being, rather it is a biochemical mismatch of a concept that nature still does not understand: human society in the 21st century.

And as always, why study this? In this case I think the answer is very clear. Due to the role that glutamate has in various neurodegenerative pathologies, it results in an important - although also complex - pharmacological target. Some examples of these diseases, although we have not talked about them in this review because I consider that an entry could be written exclusively about this, are Alzheimer's disease and Schizophrenia. Subjectively, I find the search for new drugs for schizophrenia for two main reasons: the prevalence of this disease and the healthcare cost carries; and the adverse effects of current antipsychotics, which in many cases hinder adherence to therapy.

The 6 stress hormones and their effects on the body

There are several ways in which a person can respond to a stressful situation, since this constit...

Vestibulocochlear nerve: what is it and what functions does it have

The vestibulocochlear nerve constitutes the eighth cranial nerve of nerves and its function is es...