Muroexe, the Spanish footwear that has triumphed around the world

Two young Spaniards have achieved that half the world has finished surrendered at their feet. Literally, his shoe designs have become a success and a great claim that is already awaited with great enthusiasm in New York. Esmeralda Martín and Roberto Heredia are two entrepreneurs who one day decided to create a hybrid footwear that fused the comfort of a sports shoe and the elegance of a shoe. dress to create what is now called Muroexe.

It is a shoe that combines the design of clean and minimalist lines with a lot of style and the comfort and functionality that everyone is looking for. Muroexe devised this footwear thinking of the young workers and urbanites of the big cities between 25 and 40 years old who do not want to give up comfort or style.

Its models fit perfectly with any aesthetic and this is corroborated by more than 100,000 pairs of sold in more than 50 countries around the world. They currently have a total of 320 distribution points in multi-brand stores

instagram story viewer
Y their website it is fuming. On ‘Black Friday’ they sold more than 5,000 pairs of these shoes-sneakers only ‘online’.

It is expected that at the end of 2017, the Spanish company Muroexe expects to bill a total of 4 million euros. But their success has not come out of nowhere, since when they started in 2013, they sold eleven pairs on the first day, but none on the following days. “We went for a walk to see what we were doing wrong. We identified the errors and after two months we had already exhausted the first stocks, a thousand pairs, "Esmeralda Martín explained to the" La Información "portal.

However, for Roberto and Esmeralda it is not enough, and this 2018 they are willing to go all out, landing in the US market. Currently their nerve center is in Madrid, but for their arrival in the United States they plan to open a own logistics warehouse on the East coast, to «solve the distribution issue and make the product more attractive with its price".

Muroexe is sold at various points of sale in Spain, Germany, the United Kingdom, Portugal, Japan, Canada, among many others. But their eyes are on the New York Big Apple, where young workers in their 30s need to know and wear their hybrid footwear, comfortable but sophisticated and elegant. "We saw that there was a market gap that was not covered." That of young people who have grown up with sneakers and when they have had to wear something more formal have had to refuse to wear shoes.

This is exactly one of the keys to the success of Muroexe, its meticulous aesthetics that have been thought out in detail to satisfy its customers. But the materials are also cutting edge. Light, breathable, resistant and flexible, the materials used are only synthetic and 100% vegan, one of the characteristics that also attracts the attention of its buyers.

His designs are made by engineers and industrial designers. "None from the world of fashion," says the co-founder of the Spanish company. They even had to go to Asia to get their footwear produced, because in Spain it was very difficult for them, although "not so much because of an economic issue but because of production volumes and technology".

They began to produce their hybrid footwear in a family business in Alicante, then moved to one in Toledo, but to grow they needed to go abroad, specifically Asia, “where we found the capacity to produce in large volumes and new materials and technology because in the end all the big brands on the market manufacture there and you have any novelty there".

The 8,000-euro boots that have revolutionized the networks now have a ‘low-cost’ version

Kendall Jenner has revolutionized social networks after her last public appearances in which she ...

Samanta Villar, after generating a great controversy after her statements about motherhood, which... 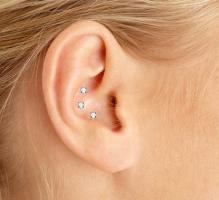 The 10 types of ear piercing: what they are like and with what style they fit

Since ancient times, piercings have been used to adorn the face. Not only for women, in many cult...