Neural death: what is it and why does it occur?

All neurons of our body have a life cycle. They are formed, live, exercise their functions and finally die and are replaced. In fact, it is something that happens constantly in different systems of the body.

However, the nervous system is a particular case in which, once in adulthood, hardly any new neurons are going to be produced. And the ones we already have are not going to live forever: little by little and for different reasons, they are going to degenerate and die. It is because of that In this article we are going to talk about neuronal death and the two main processes by which it occurs.

What is neuronal death?

The concept of neuronal death refers, as the name itself indicates, to the death of cells nerve cells known as neurons. This involves a series of far-reaching repercussions, such as the fact that the cell will no longer be able to carry out its function of transmitting information (with the consequent decrease in brain efficiency or even loss of functions depending on the number, area and functions of the cells dead).

However, it is not limited to this, and it is also that the death of a neuron can have an effect on neighboring cells: it supposes the existence of some Residues that, although generally can be eliminated by the system, can also remain in it and interfere with the normal functioning of the system. brain.

The process by which a neuron dies can vary greatly depending on its causes, as well as the results of said death. It is generally considered that there are two main types of neuronal death: that produced naturally by the cell itself or apoptosis and that produced by injury or necrosis.

In general, we tend to consider neuron death to be a negative thing, especially considering that practically no new neurons are produced once in adulthood (although some areas have been discovered where they do there are neurogenesis). But neuronal death is not always negative, and in fact throughout our development there are even specific moments in which it is programmed. We are talking about apoptosis.

Apoptosis is itself the programmed death of the body's cells, which allows it to develop by getting rid of unnecessary material. It is a cell death that is beneficial (generally) for the body and that serves to develop ourselves or to fight against possible damage and disease (diseased cells or harmful). This process is characterized by requiring energy to be produced, and cannot be carried out in the absence of ATP (adenosine triphosphate, a substance from which cells obtain energy).

At the brain level, this occurs especially at the time of neuronal or synaptic pruning, when a high percentage of patients die. neurons that have been developing during our first years in order to allow a more efficient organization of the system. Those neurons that do not establish strong enough synapses die because they are not used regularly and those most frequently used remain. This allows our maturation and increased efficiency in the use of mental resources and available energy. Another time when apoptosis also occurs is during aging, although in this case the consequences generate the progressive loss of faculties.

In the process of neuronal apoptosis the cell itself generates biochemical signals (either by positive induction in which the receptors the membrane receptors they bind to certain substances either by negative or mitochondrial induction in which the ability to suppress certain substances that would generate the activity of apoptotic enzymes) that cause them to condense and alter the cytoplasm, the cell membrane, the cell nucleus to collapse and fragment the DNA. Finally, the microglial cells end up phagocytizing and eliminating the remains of the dead neurons, so that they do not interfere with the normative functioning of the brain.

A special type of apoptosis is called anoikis, in which the cell loses contact with the extracellular matrix material, which ends up causing its death by not being able to communicate.

Necrosis: death due to injury

But neuronal death does not just happen in a pre-programmed way as a way to improve the efficiency of the system. They can also die due to external causes such as injury, infection or poisoning.. This type of cell death is what is known as necrosis.

Neuronal necrosis is that neuronal death caused by the influence of external factors, generally of a harmful nature. This neuronal death is mostly detrimental to the subject. It does not require the use of energy, being a passive neuronal death. The neuron is unbalanced by the damage and loses control of its osmosis, breaking the cell membrane and releasing its contents. It is common for these remains to produce an inflammatory reaction that can generate various symptoms. Contrary to what occurs in apoptosis, it is possible that the microglia do not get to engulf the cells dead properly, leaving remains that can cause interference in the operation normative. And although over time they are phagocytosed, even if they are removed they tend to leave a scar of fibrous tissue that interferes with the neural circuitry.

It is important to bear in mind that necrosis can also appear if, in an apoptosis process, there is a loss of ATP. Since the system needs energy to produce apoptosis, if it runs out of it, neuronal death cannot occur in a normal way. preprogrammed so that although the neuron in question dies, the process cannot be completed, which will cause the death in question to be necrotic.

Neuronal necrosis can occur from multiple causes. Its appearance is common before processes such as hypoxia or anoxia, cerebrovascular accidents, head injuries or infections. Neuronal death due to excitotoxicity is also well known, in which neurons die due to the excessive influence of glutamate (main exciter of brain activity), as occurs with some drug overdoses or drug intoxication.

The influence of neuronal death in dementias and neurological disorders

We can observe neuronal death in a large number of situations, not all of them of a clinical nature. However, a recently discovered phenomenon in the relationship between dementia and neuronal death is worth highlighting.

As we age, our neurons do so with us, dying throughout our lives. The microglia are responsible for protecting the nervous system and engulfing the remains of dead neurons. (through apoptotic processes), so that although faculties are being lost, the brain tends to remain healthy within the limits of normal aging.

However, recent research seems to indicate that in people with dementia, such as Alzheimer's itself, or with epilepsy, the microglia it does not exert its function of engulfing dead cells, leaving remains that cause inflammation of the surrounding tissues. This means that although brain mass is lost, there are still remains and scar tissues that, as they go accumulating, they increasingly impair the performance of the rest of the brain, in turn facilitating greater death neuronal.

Although these are recent experiments that must be replicated to obtain more data and falsify the results, these data can make us better understand the process by which the nervous system deteriorates, so that we can establish better strategies and treatments that alleviate neuronal destruction and perhaps, in the long run, stop diseases until today incurable.

The parietal lobe, located under the cranial bone that gives it its name and between the frontal ...

The cerebral cortex, which is the most iconic part of the brain and known for its folds and labyr... 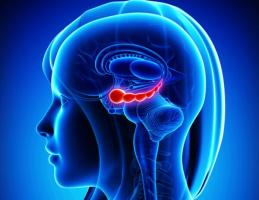 Hippocampus: functions and structure of the memory organ

The hippocampus is one of the parts of the brain more important. It is situated in what is know...