Although there are multiple theories, today there is still no clear and universal definition of the concept of care. However, what is known with absolute certainty is that this basic cognitive process is important capital in the origin and maintenance of mental disorders and, in particular, in disorders of anxiety.

In the following lines we will expose the impact that the Attention Bias Modification technique is having, a new attentional psychological technique designed for the treatment of social anxiety disorder or social phobia.

The care and treatment of mental disorders

As Shechner et al. (2012), attention is a basic process that encompasses different cognitive functions that allow the brain to prioritize the processing of certain information. The fact of attending or not to certain stimuli or information can affect the development of the person, since attention is the basis of memory and learning. You can only learn and memorize experiences towards which you are attending.

According to the DSM-5 (Diagnostic and Statistical Manual of Mental Disorders), social phobia is characterized by a “fear or intense anxiety in one or more social situations in which the individual is exposed to possible examination by others people".

The person is afraid of behaving in a certain way that may be negatively valued by those around him. Namely, afraid of being judged by others and being rejected for their performance in a multi-person situation. These situations can range from giving a talk to a large audience, to having a simple conversation with someone you know.

Najmi, Kuckertz and Amir (2011), showed that people with anxiety selectively attend to elements of the environment that they consider threatening, ceasing to attend to the rest of the environment, in which they could find neutral or positive. This attentional bias often generates misjudgments that result in increased anxiety and long-term persistence of the disorder.

For example, if a person with social anxiety disorder were giving an oral presentation to an audience of 20 people, although 16 people were paying attention to the presentation and showing interest, if one person was yawning, another was playing with it mobile phone and two others talking to each other, the speaker would only look at these last actions, interpreting that his execution is being catastrophic and bored, leading to increased anxiety and, therefore, to an increased probability of making mistakes and actually worsening their performance, accompanied by a greater persistence of fear of public speaking in the future.

On the contrary, if the person did not suffer from social anxiety, possibly the behavior of these four individuals would pass unnoticed, and would interpret it as lack of sleep and / or interest in the subject of those particular people and not their own execution.

In this context, Amir et al. (2009) created a virtual technique in order to correct this attentional bias. The patient is instructed to stand in front of a computer and determine the appearance of the letters "e" or "f" as closely as possible. as fast as possible and trying not to make a mistake using the mouse (“e” left button, “f” right button) for multiple essays.

The key is that, during all attempts, before the appearance of the letter, two images of faces are presented: a face with a neutral expression and a face with an expression of disgust or rejection. In 80% of the attempts, the letter "e" or "f" always appears where moments before the neutral face was located. In this way, even if an explicit order is not given not to attend to the faces of rejection, the person unconsciously learns not to pay attention to the stimuli that he fears.

Despite the simplicity of the technique, these authors achieved, in 8 sessions of 20 minutes over 4 weeks, that 50% of patients with social phobia reduce both the symptoms and not be able to be diagnosed following the criteria of the DSM. Other authors such as Boettcher et al. (2013) and Schmidt et al. (2009) obtained similar results in their experiments.

This technique is not without controversy

According to Amir, Elias, Klumpp and Przeworski (2003), the true bias in anxiety disorders, and specifically social anxiety, is not being hypervigilant in the face of threatening stimuli (faces of rejection) -since detecting those things that can potentially harm us is a bias that all humans share and that has helped us survive for thousands of years-, but what once these threats are detected, they cannot be ignored by the person.

Therefore, the bias that causes the persistence of the disorder is the impossibility of "disengaging" attention to the threat, and modifying the attentional bias would act by eliminating this impossibility.

However, recent evidence suggests that the outlook it is much more complicated than it might seem at first. Klump and Amir (2010) found that designing the task to attend to threatening faces instead of neutral ones also produces a decrease in anxiety. Yao, Yu, Qian and Li (2015) performed the same experiment, but using geometric figures instead of emotional stimuli and also observed a decrease in the subjective distress of the participants.

Cudeiro (2016), tried to measure the attentional hook bias through an experimental paradigm of movements ocular and did not obtain conclusive evidence that bias actually existed or could at least be measured empirically.

What is vigorexia and what is its relationship with self-esteem?

Vigorexia or muscular dysmorphia is a mental disorder in which the patient worries about his phys...

How to choose a detox center? 7 keys to keep in mind

Choosing a center for detoxification and treatment of speech is a process as crucial as, in some ... 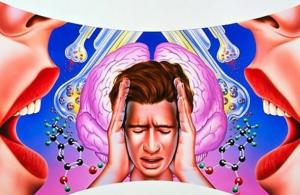 The perception is the process by which living beings capture information from the environment wit...