The 6 most important WORKS of Giorgio de CHIRICO

Giorgio de Chirico (1888 –1978) He is one of the big names in the revival of the classicist movement which emerged in Europe in the 1920s. His childhood in Greece and his Italian heritage led to enormous nostalgia for the classically inspired images of his childhood. Thus he began to work following the keys of an ephemeral movement, that of the Metaphysical painting, together with the also painter Carlo Carrà. His works were well received by the Surrealists, who considered them a forerunner of Surrealism. His more conservative personality led him to a more classical style: Renaissance and Baroque art.

In this lesson from unPROFESOR.com we offer you a selection of the most important works of Giorgio de Chirico so that you discover the most outstanding stylistic characteristics of him.

Before getting to know the most outstanding works of Giorgio de Chirico, here is a review of the style of this painter: The enigma of an autumn afternoon (1910), one of Chirico's works.

The enigma of an autumn afternoon It is the first of the series "Plaza de la ciudad metafísica", being also the one that inaugurated the series of works with scenes enigmatic and quiet of ancient cities. This canvas is the first titled with the word "enigma", using this word as a way of relating the real and the unreal, being so that De Chirico declared to have painted this picture after he felt a revelation in the Piazza Santa Croce of Florence A moment when he felt as if he saw the world for the first time.

Thus, it represents an empty square in which a classical facade appears, long shadows and deep colors and a statue. The sail in the distance seems to refer to the port of Piraeus in Greece. 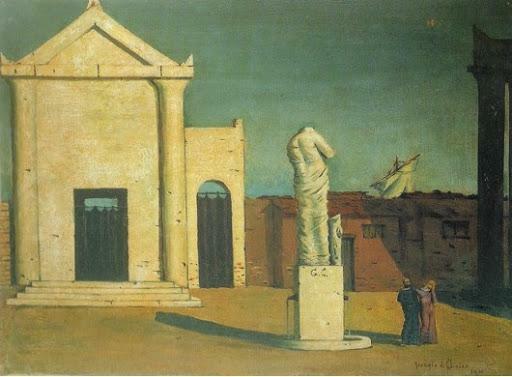 This is another of Giorgio de Chirico's works that most impressed the surreal André Breton, who acquired the work as soon as he saw it and discovered how someone was already capturing dreamlike scenes in which the unconscious was the protagonist.

De Chirico revealed to Breton that the man represented was his father, although it is also identified as a portrait of the god Dionysus. Gare Montparnasse: The melancholy of departure (1914)

This work, considered as a architectural masterpiece, does not represent a particular place, being just a theatrical setting with an unreal backdrop. A work in which the painter used various vanishing points, deep colors and the elongated shadows of the sunset.

The painting also features common elements in his compositions, such as a train or the clock tower. In this painting they appear specifically as a reference to his next departure to join the Italian army in the First World War. The trains they are also interpreted on his canvases as symbols of life and the energy of youth. 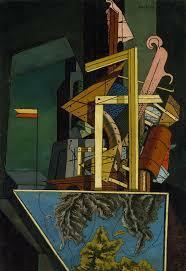 This is another of Giorgio de Chirico's most important works, and its content is also one of the most repeated motifs in his works. The artist always looks beyond appearance and tries to raise metaphysical aspects of reality, addressing issues such as memory, truth and mythology. In this canvas, De Chirico shows a scene in which one can recognize the Castello Estense, in Ferrar, the city where he lived in 1917. The castle is seen in the background of the painting and you can see how De Chirico does not stick to scale and all the elements seem to be miniature models placed in a still life.

There are about 18 copies of this same painting made by the artist to date to the early 1910s. and try to sell them, in addition to taking revenge on the critics who detracted from his works after those years. This painting served as inspiration for a painting by Silvia Plath (1932-1963), American poet and novelist. This is another of the metaphysical interiors belonging to the series of canvases painted by the artist in Ferrara. As in other works in the series, the work looks like a room full of very diverse objects, as well as framed images. A scene inspired by his walks through the arcades of the city and in which food also appears, something common in the paintings of this time and that seems to refer to the gastrointestinal problems that I had. De Chirico also made numerous self-portraits, especially in the 1920s. Some pictures in which the Mannerist style of the 16th century. An example of how, as the years passed, the painter became more conservative and sought inspiration in older techniques. In this self-portrait he is shown as a kind of classical bust. If you want to read more articles similar to Giorgio de Chirico: most important works, we recommend that you enter our category of Story. The discovery of America It was one of the most important events of the entire Modern Age, as it ... A common element of all mythologies in history is the existence of so much male and female gods, ...

How life arose according to the Mayans

When talking about more interesting mythologies of history we always tend to approach the Mayan, ...