The Eating Disorders (Eating Disorders) they involve an alteration in our relationship with food. Many times, they are accompanied by other types of disorders, such as depression or anxiety.

In this article we will talk about the importance of having healthy eating patterns; In addition, we will know the 6 most important Eating Disorders (ED) and what their fundamental characteristics are.

Our relationship with food

Our relationship with food determines, to a large extent, how we treat ourselves or how we take care of ourselves. It also has a lot to do with our state of mind; Thus, when we feel anxious or depressed, our eating patterns can change a lot. If there is any alteration in this relationship, an eating disorder (ED) may appear.

If we do not see ourselves well physically, and we are also bad inside (with anxiety, depression, etc.), eating disorders may appear. It is important to say, but, that social and cultural factors are of great importance for its genesis (especially in the anorexia or bulimia, where advertising, the culture of thinness and fashion are key elements to precipitate its appearance).

In the etiology of eating disorders we find a multifactorial cause. Thus, different factors influence its genesis (it is very difficult to say that a disorder arises from a single cause); These factors are temperamental, personality, society (social factors), genetics, education, culture, etc.

On the other hand, if we have "learned" to relate to food based on our mood, it is very likely that we end up developing very dysfunctional behaviors in relation to our feeding. For example, if when we are anxious, depressed or nervous, we eat excessively (or on the contrary, we stop eating).

That is why it is very important to take care of these eating patterns.. On the other hand, low self-esteem and social pressure to be thin are key elements that explain the etiology of anorexia, for example. In other words, behind Eating Disorders (ED) there are also important psychopathological symptoms.

The 6 types of eating disorders

But, What are Eating Disorders (Eating Disorders)? How many are there and what characteristics does each one have? Let's find out through this article.

The DSM-5 (Diagnostic Manual of Mental Disorders) classifies 8 eating disorders (ED). However, of these 8 we are going to explain the 6 most important, since 2 of them are the "Unspecified Eating Disorder" and "Other Specific Eating Disorder".

Anorexia Nervosa (AN) is one of the most serious Eating Disorders (ED). 90% of patients with AN are women (vs. 10% of men). Its main symptom is a refusal by the patient to maintain body weight equal to or above the minimum normal value (depending on her age and height).

Thus, patients with AN must have a weight less than 85% of that expected, or fail to achieve the normal weight gain during the growth period in which they are (according to criteria of the DSM-5).

In addition, there is an intense fear of gaining weight or becoming “obese”. There is a great alteration of the perception of weight or body silhouette; people with AN look fat, even though their low weight is really worrisome. For this reason, they resort to dysfunctional behaviors such as: exercising excessively, vomiting, taking laxatives, etc. (depending on the type of AN).

In AN, in addition, there is an important psychopathology associated with treating (alterations in body image that can become delusional, negative thoughts, low self-esteem, lack of impulse control, obsessive improvement, rigidity, suicidal ideas, self-injurious behaviors, etc.).

Bulimia Nervosa (BN) is another of the most frequent Eating Disorders (ED), along with Anorexia Nervosa. As in anorexia, in bulimia 90% of patients are women.

In this case, According to DSM-5 diagnostic criteria, patients have recurrent binges and inappropriate compensatory behaviors (who have the goal of not gaining or losing weight). These behaviors translate into: inducing vomiting, use of laxatives, diuretics, enemas and other drugs, fasting, excessive physical exercise, etc.

On the other hand, these people evaluate themselves based almost exclusively on weight and body shape.

Pica is an eating disorder that appears in childhood. Its diagnosis should begin to be made from 2 years of age. It consists of persistently ingesting non-nutritive substances (for example chalk, earth ...).

This symptom should last at least 1 month, and is inappropriate for the child's developmental level (that is, it is not explained by her maturational level). In addition, such behavior of ingesting substances that are not food is not part of culturally accepted practices.

Rumination disorder is included as one of the 8 eating disorders (ED) stipulated by DSM-5, although it is a childhood disorder. Thus, this usually appears in childhood.

It is also called mericism, and it is characterized by the fact that the child manifests regurgitation and new repeated chewing of food; this symptom should last more than 1 month. Also, there should be no disease that can explain this symptom (for example, esophageal reflux).

Binge eating disorder (TAC) is a disorder somewhere between obesity and Bulimia Nervosa. It is characterized by the presence of recurrent binges, in the absence of inappropriate compensatory behaviors (typical of bulimia).

After binges, patients feel profound discomfort when remembering them. In order to be diagnosed with TAC, binge eating must occur (on average) at least 2 days a week for 6 months.

Avoidance / Restriction of Food Intake Disorder is another of the Eating Disorders. eating behavior (ED), like rumination disorder and pica, also typical of childhood.

An alteration in the diet appears, which translates into: lack of interest in food, avoidance of it, concern about its aversive consequences, etc. In addition, this disorder is also characterized by a significant weight loss or significant nutritional deficiency in the child.

It may also be that the child, due to her behaviors with food, depends on enteral feeding or oral nutrition supplements.

The 3 Levels of the Language (and its characteristics)

Language is one of the most important capacities of the human being., since we are social animals...

What is Social Anxiety? Definition and differences with shyness

Each of us are different in our way of being and this affects our way of relating to others. Thus... 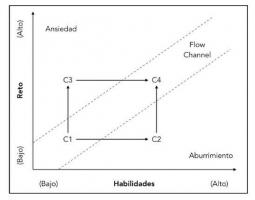 Flow, in search of the optimal experience

We live in a world where it seems that if you don't make the most of your time and be super produ...