What is the law of the final accent 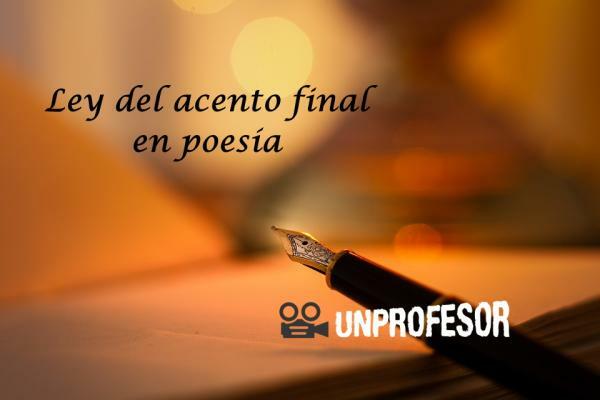 The lyric has its own characteristics and in order to perform the analysis of a poem it is necessary to resort to the metric. This, for its part, presents a series of rules that must be followed when doing it correctly, but the truth is that includes a series of licenses that make the poems adaptable to the characteristics of each of the types of verses. In this lesson from a TEACHER we want to explain to you what is the law of the final accent with examples so that you can make a proper analysis of any poem.

You may also like: Verses of minor art: definition and examples

How to analyze a poem.

The analysis of a poem aims your understanding. This can only be achieved through its formal elements, so we must know them correctly in order to carry out its analysis. The poems are lyrical texts that are written in verses, these in turn are grouped in stanzas and have a rhyme.

These elements are what will help you define and identify the poem before you find yourself in a formal way, that is, taking into account its structure. On the other hand, we could point out that a stanza is several verses, that they have a measure and that they have a common rhyme.

One of the most important elements when it comes to being able to analyze a poem correctly is the measurement. This will mark one of the parts of the structure of the same and will be essential when it comes to understanding it. For this reason, it will be necessary to first point out what the measure to later be able to focus on the law of the final accent and its examples.

What is the measure in a poem

The measure makes references to the number or number of syllables that make up each verse that composes the stanzas. The verses are measured by counting the syllables they have and assigning each of them a letter that will help to mark the verses that rhyme with each other.

Depending on whether these verses contain a greater or lesser number of syllables, they will be assigned an upper or lower case letter. Thus, the so-called verses of minor art (those with 8 or fewer syllables) will be represented by a lowercase letter and those of major art (those with more than 8 syllables) will do so with a capital letter. For their part, those verses that do not rhyme will be called single verses and its rhyme will be represented with a hyphen.

But the syllables of a poem have their own rules when it comes to being measured, thus, depending on certain aspects, the number of syllables that we obtain can be different from the one that the word has in itself herself. This is due to the use of the following licenses:

All of them are licenses that have to do with the measure of the verses and, therefore, you have to know them in order to measure a poem and analyze it correctly. For our part, we want to focus on the final accent, its definition and its examples in order to understand it better. 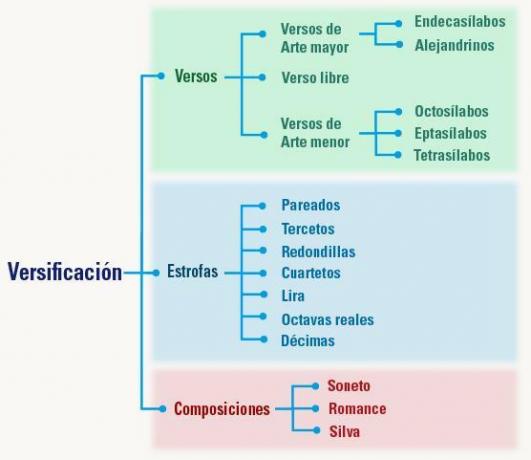 What is the law of the final accent.

Simple verses always have the accent on the penultimate syllable, in the case of compound verses, this accent will always appear on the penultimate syllable of each hemistich (each of the parts of a major art verse, which are separated by a pause internal). Thus, these fixed accents are called strophic accents. In addition, we must take into account the law of the final accent, by which the number of syllables in a verse is modified.

In other words, when counting syllables in a verse we must take into account the accentuation of the last word that composes said verse, since depending on this its number of syllables will be modified.

For this reason, it will be necessary to distinguish between flat, sharp or esdrújulas words when these are at the end of the verse, since they must add or subtract syllables following the law of the final accent. Therefore, the guidelines to be followed will be: 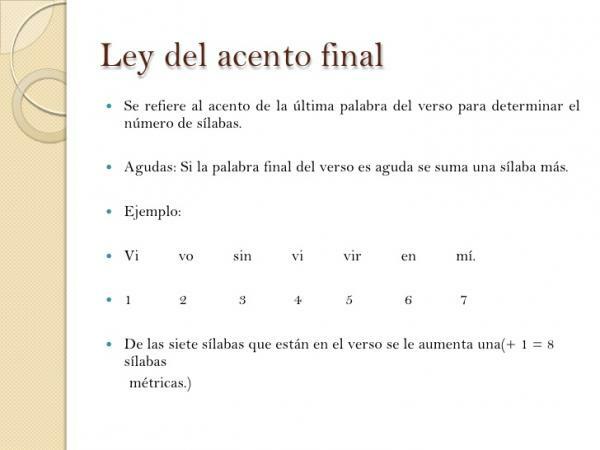 Examples of the law of the final accent.

In order to better understand how this law is applied in the measure of verses, we are going to provide you with a series of examples in which the accent of the final words will cause the number of syllables of this to be modified.

Number of syllables when the final word is acute

As we have pointed out previously, when the final word of the verse is sharp, it is necessary to add one more syllable tailored to that verse. Let's look at an example to understand it better. This verse belongs to the rhyme XLVIII by Gustavo Adolfo Bécquer:

The verse ends with a sharp word, when dividing the syllables we see that we get 10. We must bear in mind that this verse also has two sinalefas, so with them and the final accent we will achieve a total of 11 syllables:

Number of syllables when the final word is esdrújula

In the event that the final word of the verse that we are analyzing is esdrújula, we must subtract a syllable to which we have obtained once counted. Thus, we are going to see an example that illustrates this measure and the law of the final accent in another verse belonging to Pomegranates in the blue sky by Juan Ramón Jiménez:

As we see the final word of this verse is esdrújula and therefore we must subtract a syllable from the count. In this case we do not have any sinalefa, so it would be as follows:

You already know some of the metric licenses such as the law of the final accent with examples, but you can continue learning more about rhymes and types of stanzas by accessing our section of Spanish language in which you will find a multitude of articles. 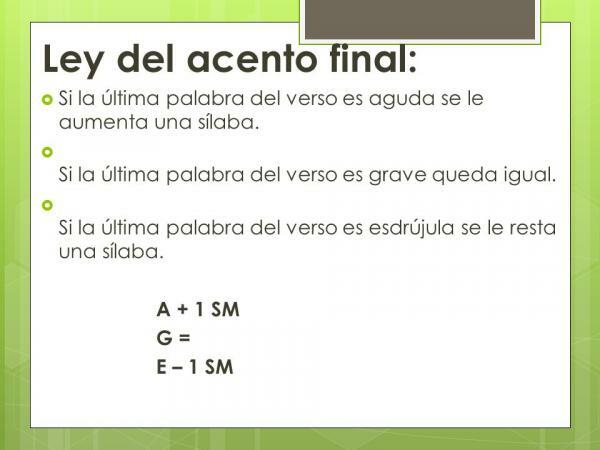 If you want to read more articles similar to Final accent law - with examples, we recommend that you enter our category of Literary concepts. 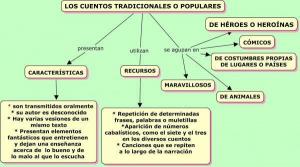 What is the DEVELOPMENT of a story

A story or a narrative It is made up of different parts; These are essential for the proper funct...

What are LITERARY TOPICS [with more than 20 EXAMPLES]

The literary topics They are a series of set phrases that are used in literature and that link di... 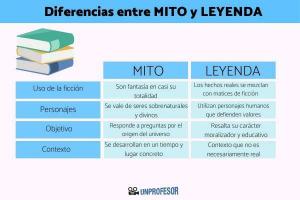 5 differences between MYTH and LEGEND

Literature has served as a vehicle for human beings to express ideas, traditions, customs and way...