What are the DIALECTS of PERU 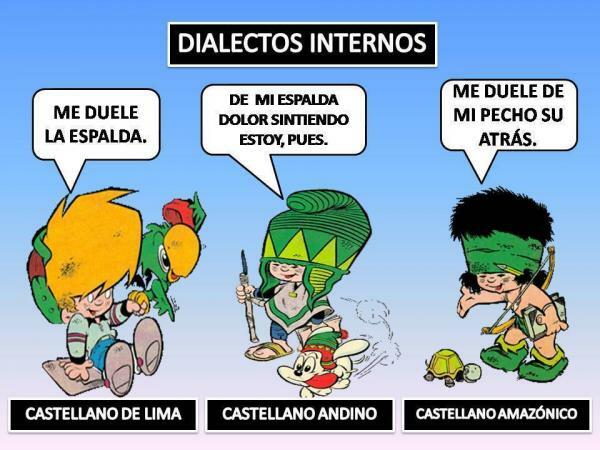 Peru is a multilingual country in which its official language is Spanish. Their languages ​​are preserved in different areas of the country and are commonly used by its inhabitants. Although it is estimated that it has an average of 50 languages, only some of them are spoken by the most people. In this lesson from a TEACHER we want to show you what are the dialects of Peru, in which areas it is spoken and how many people use it. The State is in charge of protecting and recognizing the different dialects in order to preserve them as a cultural asset of the country.

In the first place and in order to identify which are the dialects of Peru, it is advisable to make a small definition of what they are.

A dialectit's a linguistic system that is derived from another. Despite this, there are differences between the two. These, due to their particularities, are not considered as languages ​​and their particularities are marked by the geographical region in which they are spoken. In Spain, we also have different dialects, as you can read in this lesson. 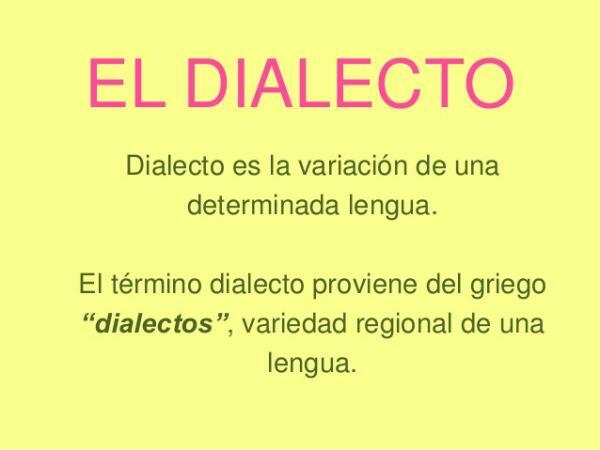 Due to its size and the areas that encompass its borders, Peru is one of the South American countries that has a greater linguistic variety. It has three official languages that coexist with each other according to the region of the country in which we are located. These are:

Although these three are the majority languages, the Peruvian State recognizes as official all indigenous languages with the aim of conserving and maintaining them as a cultural asset. Therefore, if we make a count, we do not find that, before the Spanish conquest, in Peru they spoke 47 native languages.

It is a language of indigenous origin. It is the second official language of the country because it is the most widely spoken after Spanish. The importance of the Quechua language must be sought in the Inca town. This was used by the inhabitants of the Empire officially and is the most prevalent in the towns that are located in the area of ​​the Peruvian highlands. It currently has four sub-dialects:

Although it was born in Peru, its influence extends to territories located in the western part of South America and is a language spoken in six different countries: Colombia, Ecuador, Peru, Bolivia, Chile and Argentina.

In addition to those mentioned there are many others that are in the process of recognition by the Ministry of Culture of Peru to also be conformed as official languages ​​of the State. In order to become part of these, dialects need to have their own alphabet and writing.

This official language is the most minority of the three that we have previously mentioned, but it is used by more than 1.5 million people in the country. This is used mainly in the southern part of Peru in places near Lake Titicaca like Puno, Moquegua and Tacna.

It was born in the center of the Andes and is considered by UNESCCO as a vulnerable tongue it tends to disappear. With the aim that these are not lost, the Ministry of Culture of Peru carries out programs aimed at promoting indigenous languages ​​in each of the regions where they are spoken. 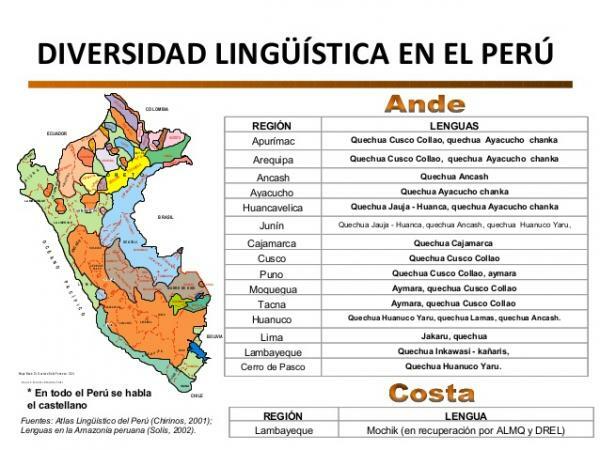 Spanish is the most widely spoken language since it spread throughout the territory after the Spanish conquest in 1532. We must bear in mind that most of the conquerors came from Extremadura, the Canary Islands and Andalusia, hence the particularities of this Castilian. Although there are other official languages ​​in Peru, the recognized dialects are those coming from Spanish. Within Spanish, the dialects that we show you below have been fixed.

This kind of spanish it is the most extensive territorially and it has dialectical variations from the Peruvian riparian and the Caribbean dialect. In addition to Peru, it is spoken in Ecuador and Colombia. This dialect, in Peru, is spoken by the inhabitants of the departments of Piura, Lambayeque and Tumbes. As main characteristics we have the aspiration of the s and there is confusion between the l and the r, on many occasions they are exchanged.

It is mostly spoken in the capital of Peru, Lima, it is the least common of all the Spanish dialects in the country, so only 15 percent of the population speak it. Despite this, it is the basis of Peruvian Spanish that is used in an official and cultured way.

Among its main characteristics, it stands out that the s it sucks when it is in a final position and goes before a consonant, the same does not happen when it is placed before a vowel or a pause. They convert the d end of words in t. Its rhythm is slower than that of standard Spanish and in spoken language some prepositions tend to be omitted.

It is used in the highlands of Peru. Its main characteristics is that it has intermediate vowels, that is, they have vowel sounds between the letters and-i and between or-or. The s, unlike other types of dialects of Spanish, in this case is not aspirated. The s has a louder sound. They also preserve the sound ll.

They are loists, that is, they substitute the pronoun for him in sentences and use diminutives very frequently. In this dialect the compound past is replaced by the simple past tense and the subjunctive mood is replaced by the indicative in subordinate phrases. Likewise also they duplicate possessives and objects. Regarding the use of articles, they sometimes dispense with them and sometimes abuse them depending on the speaker. Verbs are usually placed at the end of the sentence and this in many occasions is usually accompanied by the tagline, no more or well that are placed after the verb.

The dialect known as Amazonian Spanish occurs when Andean and Lima Spanish comes into contact with the native languages ​​of the Amazon and therefore takes peculiarities of these.

Its features include that s it is not aspirated and that there is confusion when pronouncing the letter j, which in most cases is replaced by the F pronounced bilabially. For their part, the phonemes p, t, Y k They have a small aspiration characteristic of the inhabitants of these areas of the country. Finally there is a change of order in the structure of the sentence.

If you want to know more curiosities about the Spanish language, its variations, the countries in which it is spoken and other articles similar to which are the dialects spoken in Peru, be sure to visit our section of Linguistics and Grammar. 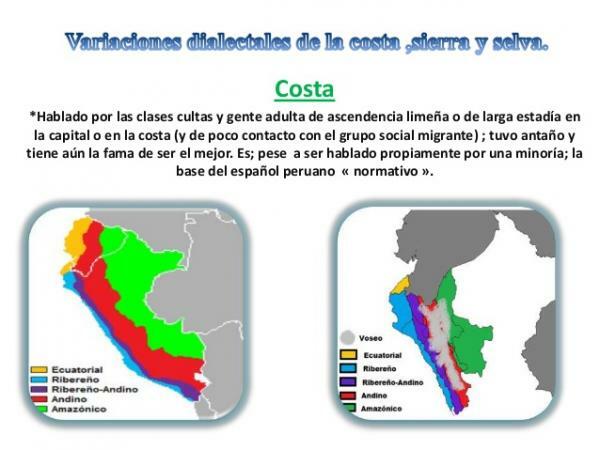 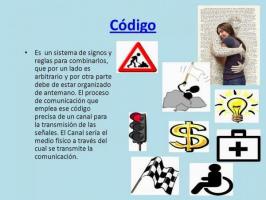 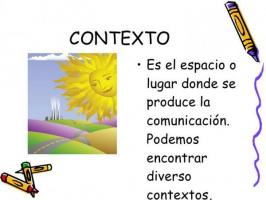 Image: SlideshareA new lesson from a TEACHER starts in which we are going to study the definition... 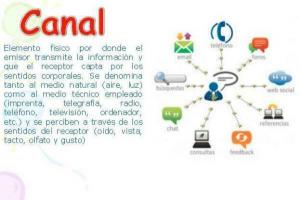 Image: Google SitesWhen you talk with a friend and even if you are sending a text message with yo...