In this new video I will explain what it is the writing convention on triangles.

The main points of a geometric figure, like the vertices of a polygon, are usually designated by uppercase Latin letters: TO, B, C.

A triangle it is then named like any other polygon, successively designating its vertices, for example ABC. In the case of the triangle, the vertices can occur in any order, because any of the 6 possible ways (ABC, ACB, BAC, BCA, CAB, CBA), corresponds to a tour of its perimeter. This is no longer true for polygons with more vertices.

The sides of the triangle are denoted, like all segments, by their ends: AB, BC Y AC.

To name the length On the one hand, the name of the opposite vertex is usually used, converted to Latin lowercase: to in order to BC, b in order to AC, c in order to AB.

The general notation for the angle between two segments OP Y OQ who share the end OR. It is also possible to use a lowercase letter surmounted by a caret.

In the video you can see graphically the triangle writing convention.

Also, if you want to practice what you learned in today's class, you can do the printable exercises with their solutions that I have left you on the web. 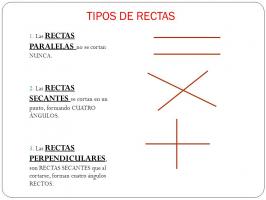 Classification of the line according to its relationship

In this video I will explain the lines according to their relationship in space on technical draw...

Construction of polygons inscribed in a circle 1

In this video I'm going to show you a basic problem to find polygons inscribed in circles. These ...

Construction of polygons given the radius

In this video I will an exercise to find polygons with just the radius. This exercise is very sim...